Nope, you are not the only one to ask, where the devil is Ios? What is Ios, and why does it keep auto correcting to iOS? Ios, the island (not the operating system) is a little bit of heaven on earth. It gave me a lovely autumn tan, enough sun bed drama to last me a lifetime and the bug to travel to Greece a lot more.

Want to know why I chose Ios?

Take a seat, are you ready? I was in a bar, just a typical Friday eve sipping on a Jamaican beer, moaning about the price of holidays during the summer break. Nothing was tickling my fancy and I had ran out of destinations that were cutting it for me, I was done. I was peak winge, when the bar manager came over and threw out a destination idea for me. The stars aligned in Turtle Bay, they always do, and this is how I ended up holidaying into the unknown. I explained that there was nowhere that was tickling my pickle and he suggested a little Greek Island called Ios – a 40 min boat ride from Santorini or 4 hour mini trek from Athens. He was about to head back to the island to celebrate his 10 year wedding anniversary, because, it really is that good.

He told me that it would contain a bit of adventure to get there. Tick. That there is no airport on the island. Tick. It doesn’t cost an arm and a leg, has the authentic living like a local vibe that I am after, and sandy sandy beaches. Triple freaking tick. So this is why Ios is my summer holiday destination this year. Now, I can’t class Greece as a country I have never travelled to, as Kavos 2005 did in fact happen. But as an adult, yes, this is the first time I have visited Greece. Not only have I ticked Ios off on this Grecian trip but I’ve added the dream destination of Santorini too.

There is only a few ways to reach Ios, all by boat, unless you are Busted and travel by helicopter. So this gals travel plans meant a one night stay in Santorini before catching the early morning boat over to Ios. The Cycladic island of Ios is slap bang in the middle of Santorini and Mykonos, giving the right amount of sass vibes I was looking for this summer. I didn’t want party party but I did want somewhere with a bit of character, somewhere I can eat local food, have some adventure and feel like I am exploring somewhere a million other people weren’t. I’m looking at you Marbs. Been there, done that, got the peeling lizard spay tan t-shirt. With enough restaurants, cafes and bars, Ios was the perfect getaway.

Flights were a steal at £222 return from Manchester to Santorini via Easy Jet and the rest, I shall cover in some Greek themed posts. What ya thinkin’? What do you want to see?

There will be a stay in a cave in the traditional village of Karterados. There will be an island boat ride over to Ios and a heck of a lot of exploring, eating and cocktail quashing. 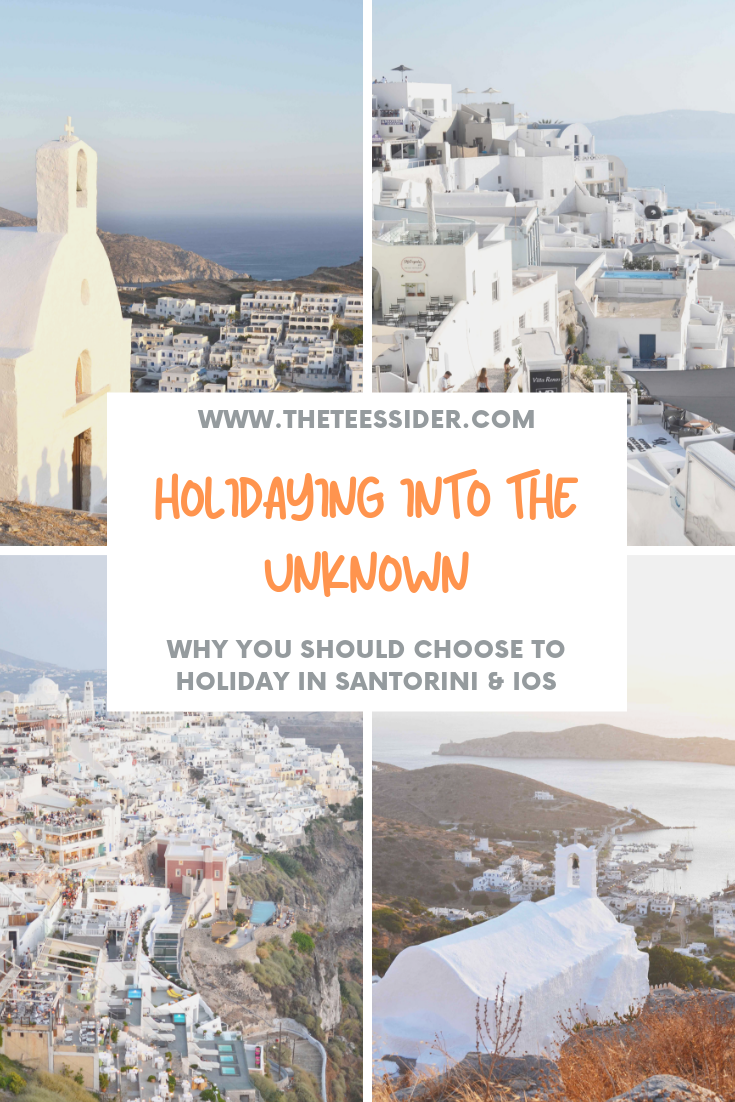 I am the brewer, baker and brains behind the The Tea House Middlesbrough. I set up my little shop 7 years ago after leaving the big city lights of London behind to come back to my roots. As a flourishing independent, which is business brewing up a storm in Teesside, I am in love with my town and what it has to offer. I love supporting new ventures and trying out new places what I share here on The Tea Bee, a life, style & food blog.